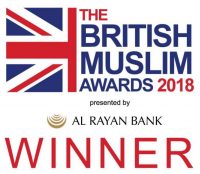 It was humbling for Fozia Naseem, Hop On, to be nominated but to win the Muslim in the Community Award at the British Muslim Awards 2018 was exceptionally amazing, alhumdolillah.

Winners for the 6th British Muslim Awards, presented by Al Rayan Bank, were announced after a lavish, black-tie ceremony was held on 31st January 2018 at the Bradford Hotel in central Bradford.

The awards ceremony aim to recognise various achievements from the entire British Muslim community in all aspects of society including business, charity, sport, arts and culture.

A spokesperson for Al Rayan Bank said: “We congratulate all of the winners of this year’s British Muslim Awards, they fully deserve the recognition that they have received. We also congratulate the nominees for the positive effect that they have had on their communities over the last 12 months.”

The evening showcased and celebrated the finalists’ sheer determination and hard work alongside the personal and commercial achievements of individuals and organisations whose work often goes unrecognised.

The awards are run by Oceanic Consulting, the UK’s leading ethnic consulting and promotions organisation in the UK, who have recently been shortlisted at the Asian Media Awards 2017 for their work in the Marketing & PR Sector, and are responsible for some of the most successful and well known events in the country such as The English Curry Awards, Britain’s Asian Wedding Awards and the English Asian Business Awards amongst others.

Irfan Younis, CEO of Oceanic Consulting said: “For a community that is often victim to misrepresentation, it is great to see the work that the finalists have been doing in various different sectors across the country showcased in a positive light and we hope to keep showcasing such committed and talented nominees in years to come.”

The evening also helped to raise funds for the National Zakat Foundation, a charity with a vision for an entirely “faithful, confident, selfless and self-sufficient Muslim community in the United Kingdom.”

With 31 awards presented on the night, the winners are as follows:

Muslim in the Community went to Fozia Naseem (West Yorkshire)

Young Achiever of the Year went to Alayna Ahmed (Blackburn)

Charity of the Year went to Muslim Global Relief (London)

Community Initiative of the Year went to Nur Fitness (Middlesborough)

Business of the Year went to Shaks Specalist Cars (Huddersfield)

Small Business of the Year went to The Nikah Company (London)

Diversity Champion of the Year went to Lancashire Constabulary (Lancashire)

One to Watch went to Shaheen Mohammed Al Mamun (London)

Online Activity of the Year went to Islamic GPS (London)

Outstanding Achievement of the Year went to Bearded Broz (Smethwick)

Retail Business of the Year went to Doors2Floors (Leeds)